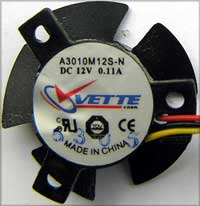 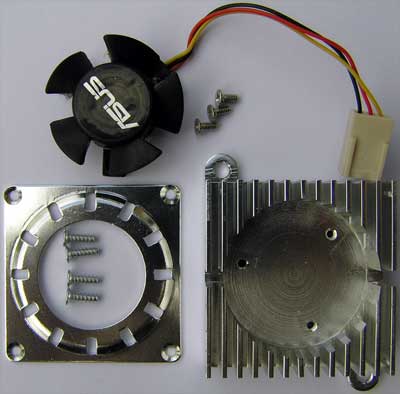 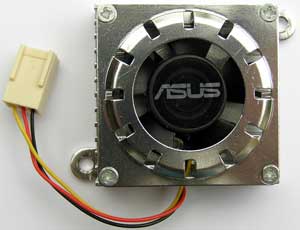 The original ASUS mainboard chipset heatsink & fan consists of a small heatsink (37 x 37 x 13mm) with a 30mm hole in it and a small 28mm fan in the middle. The fan draws air down into the heatsink and then out through the two sides of the heatsink. As the fan is mounted in the heatsink, air only passes over a small part of the heatsink.

The heatsink fan is connected to the PC mainboard with a 3 pin plug with 3 wires (+12v red, 0v black, speed yellow).

The ASUS name is on a label stuck on the fan hub.

First remove the top cover of the Heatsink. This is held on with four small philips screws.

After removing the top cover of the heatsink, the fan can be removed by unscrewing the three small philips screws under the fan blades.

The rear of the heatsink fan showing it to be a:

Made in China by Vette Corp who have a manufacturing facility in Guang Dong Province, China