If there are any chassis fans or other components that might be in the way, remove them. Keep small screws in a container or small bag.

The first stage is to remove the existing chipset heatsink / fan, follow the following stages:

The first thing to do is to unplug the external cables from the PC case. Start with the power cable and then the other cables: 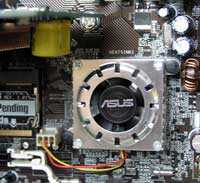 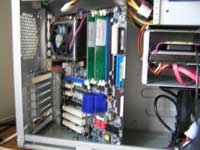 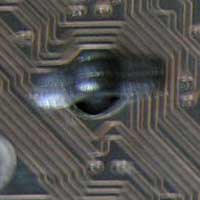 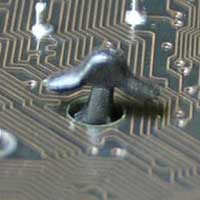 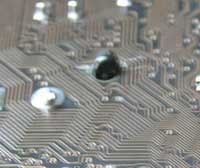 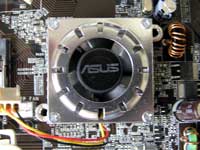 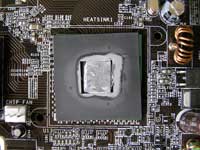 The existing fan is fixed to the mainboard to the right of the two SLI sockets.

It is held in place with two push in pins. Springs on the pins push the fan / heatsink firmly against the northbridge chip to transfer the heat without causing damage to the chip. To remove the fan, you could break the the pins but this could damage the mainboard and the pins could not be reused. In order to properly remove the pins you need to get to the rear of the mainboard.

The two black pins look like this
on the reverse of the mainboard.

Using a pair of pliers, press the end of the pin together and push it back through the hole in
the mainboard like this.
Do the same with the second black pin, make sure you hold the fan so that it does not fall off. Unplug the fan cable plug from the mainboard and lift the fan off the mainboard. Be careful of the back of the fan which will have some thermal grease on it.

Make a note of which cables are plugged into which sockets. If they are not labelled or marked, it would be a good idea to do this now. If you can not get to the rear of the mainboard (see next section) you also need to unplug the internal cables.

First remove all cables except the mainboard power cables:

Then remove the power cables:

The ASUS A8N-SLI deluxe PC mainboard is held into the case by 9 screws. Carefully remove the mainboard from the case by unscrewing these screws (the lower left screw hole may have a locating pin instead of a screw). Pull the right side of the mainboard forward making sure that the rear connector panel is clear and that power cables are not in the way, and then lift the mainboard out of the PC case.