The current 27 member states of the European Union (EU) are:

Countries applying  to join are:

The currency used in  most countries of the EU is the euro. The other countries will change their currency to the euro in the future when they meet the conditions for entry (Denmark is not required to join, but may in the future).

The EU countries that use the euro are:

Countries required to adopt the euro when they meet the conditions for entry. Countries that have 'opt-outs' from joining, but can join in the future. Some countries that are not in the EU, but have adopted the euro are: Andorra, French Guiana, Guadeloupe, Martinique, Reunion.

Monaco, San Marino and Vatican City also use the euro and, within limits, may issue euro coins

Switzerland is not in the EU and uses Swiss Francs. 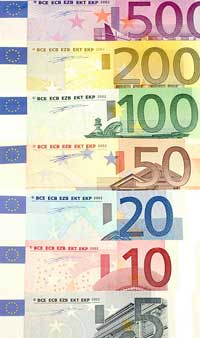 United in diversity - the motto of the European Union.